The Pradhan Mantri Jan Dhan Yojana has just completed six years. The scheme was launched in 2014. As per the data available, 40.35 crore bank accounts have been opened under the scheme till August 19.The scheme will allow the accounts of the poor of the country to be opened in banks, post offices and national banks on zero balance. 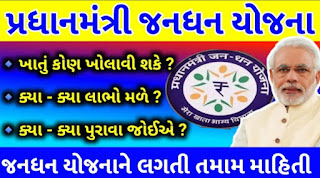 According to PMJD, the account opened gives 11 benefits to the customers. Know that you have many facilities in this scheme.How to open an account with what documents. Also note that with this account they will get the benefit of features which will be linked to the account base.

If you want to open a new Jan Dhan account, you can easily go to a nearby bank and do this. For this you will have to fill out a form in the bank.It will include name, phone number, bank branch name, applicant’s address, number of dependents with nomination, occupation and employment, SSA code, village code and city code.

If you have an old bank account, it is easy to change it to Jandhan account. For this you have to go to the bank branch and apply for the Rupee card.Your bank account will be transferred to Jandhan Yojana as soon as a form is filled.

Read All Details In Gujarati