The empowerment of the weaker sections has been a priority area of concern for the
Government since independence. A number of plans and programmes are being
implemented for assisting them so as to enhance their skills and capabilities for
ensuring rapid economic development and integration in the national mainstream.
ii) A scheme for providing free coaching to students belonging to Scheduled Castes (SCs) was started during 6th Five Year Plan. 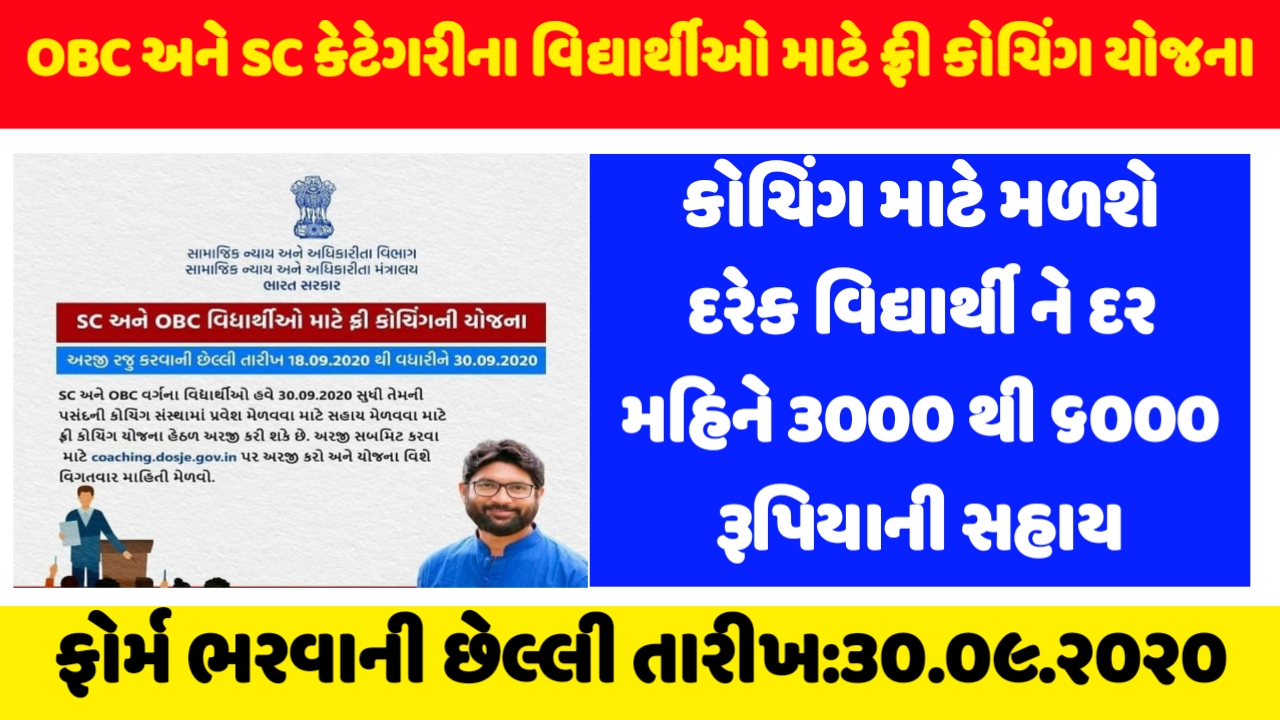 Similar schemes were also being implemented to provide free coaching to students belonging to Other Backward Classes (OBCs) and Minorities. With a view to ensure effective implementation and monitoring and to assist the students in a better manner, the separate coaching schemes for SCs, OBCs and Minorities were amalgamated and a combined Scheme, namely, ‘Coaching and Allied Assistance for Weaker Sections’ including Scheduled Castes, Other Backward Classes and Minorities was introduced with effect from September, 2001.iii)After creation of a separate Ministry to handle matters relating to the Minorities viz. 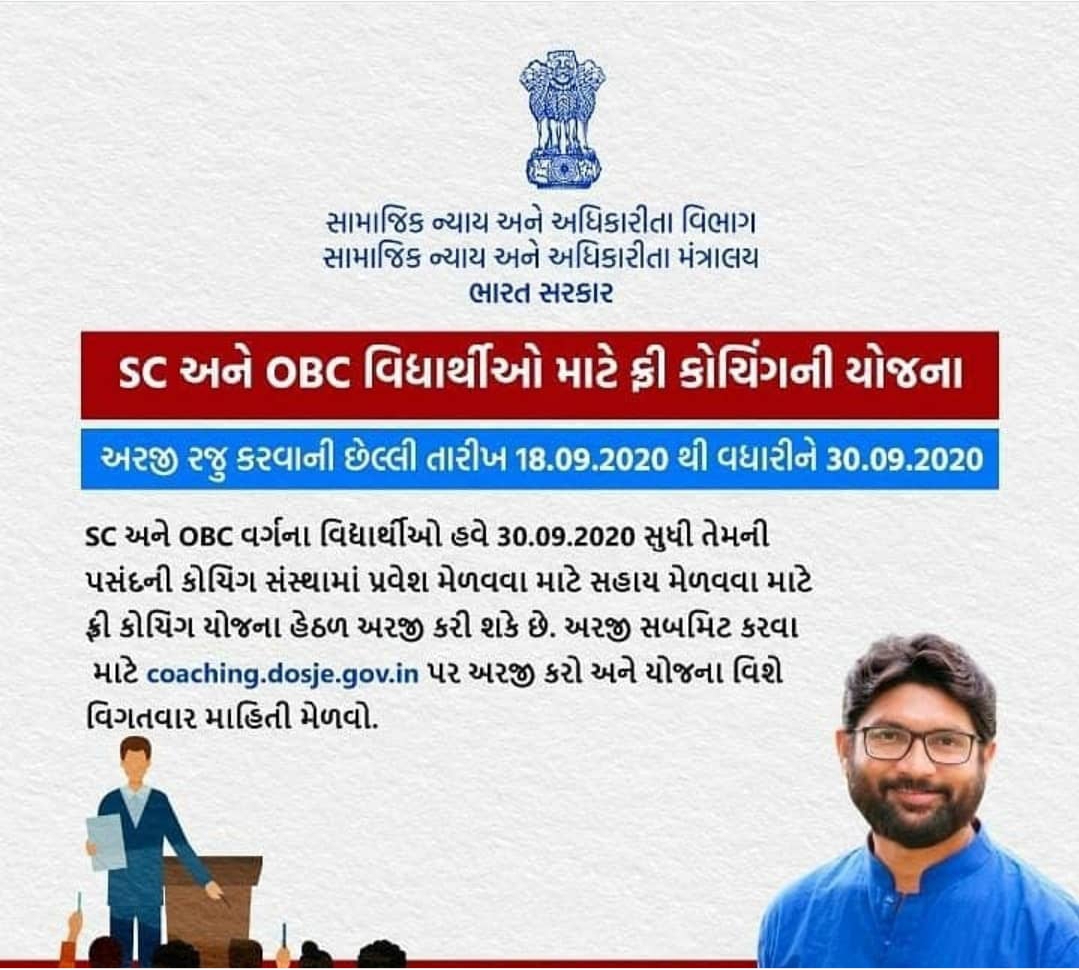 the Ministry of Minority Affairs, the Scheme underwent further revision in April 2007
for removing the minority component from the ambit of the scheme and to accommodate other changes deemed necessary at that point of time. The last revision of the Scheme came into effect from 01.04.2016.

The objective of the Scheme is to provide coaching of good quality for economically
disadvantaged Scheduled Castes (SCs) and Other Backward Classes (OBCs) candidates
to enable them to appear in competitive examinations and succeed in obtaining an
appropriate job in Public/Private Sector.

The courses for which the Coaching will be imparted shall be as follows:

However,SC/OBC candidates belonging to a Minority community shall not be eligible
under this scheme and can apply under the similar scheme of Ministry of Minority
Affairs.Following guideline shall be followed for income certificate-Income declaration of self-employed parents/ guardian should be in the form of a certificate issued by Revenue Officer not below the rank of Tehsildar.Employed
parents/guardians are required to obtain income certificate from their employer.
Employed parents/ guardians should obtain consolidated certificate from Revenue
Officer for any other additional source of income.

vii)Where the competitive examination is conducted in two stages viz. Preliminary and Mains,the candidates will be entitled for free coaching for both the examinations. They will be entitled for free coaching upto two times each for Preliminary and Main examinations as per their convenience. However, there will be no restriction in number of chances for coaching for Interview,if the candidate is selected for interview.

Maximum Fee And Minimum Duration Under The Free Coaching Scheme For SC And OBC Students: 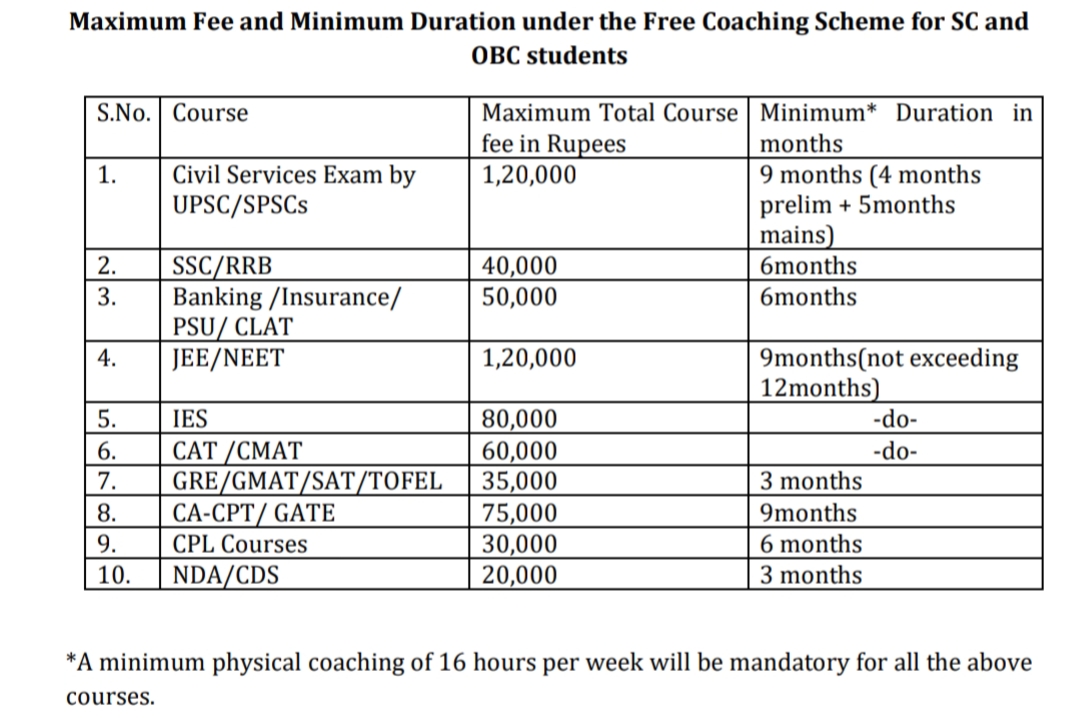 Students with disabilities would also be eligible for Special Allowance of Rs. 2000/- per month towards reader allowance, escort allowance, helper allowance etc. having valid disability certificate (equal to or more than 40% disability). This will be in addition to the stipend mentioned in para 8 ii) above.

(i)The scheme will be widely advertised through electronic media etc. giving
summarized information about the Scheme. The applicants shall, after assessing their
eligibility and suitability as per the eligibility conditions of the Scheme, will be required to apply online on this Ministry’s portal, i.e. coaching.dosje.gov.in., along with details of course he/she intends to join.
(ii)The portal will remain open for one month twice a year i.e. during July, 2020 and January, 2020 for receiving applications.
(iii)The applicants will be required to upload their applications alongwith prescribed supporting documents.
(iv) No offline applications will be entertained. Only online applications complete in all respects, shall be considered for assistance.All the incomplete applications will be summarily rejected. However, the rejected candidates will have the option to apply in the subsequent phases of selection.

(i) On closure of the application portal, separate merit lists shall be drawn up of
eligible candidates belonging to the SC and OBC categories, and within these categories
for both the levels of competitive exam mentioned in para 4 of the Scheme,by the IT system itself,based on information submitted by the candidates.
(ii) The applications will be scrutinized in the order of merit for ascertaining
eligibility.Those applications not found complete or if the applicants are found
ineligible will be rejected.

Important Dates:
The Last Date Of Submission Of Application Under Mode 2 Of FCC Has Been Extented Upto 30.09.2020.