Pradhan Mantri Kisan Samman Nidhi is an initiative by the government of India in which all small and marginal farmers will get up to ₹6,000 (US$87) per year as minimum income support. The initiative was announced by Piyush Goyal during the 2019 Interim Union Budget of India on 1 February 2019.The scheme will cost ₹75,000 crore (US$11 billion) per annum and will come in effect from December 2018.[5] ₹6,000 per year will be paid to each eligible farmer in three instalments and will be deposited directly to their bank accounts. 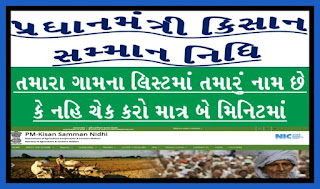 The scheme was first conceived and implemented by Govt of Telangana as the Rythu Bandhu scheme, where a amount is given directly to eligible farmers. The scheme has received accolades from various organisations for its successful implementation, including World Bank. Many economist suggest that this type of investment support is better than farm loan waivers. With the positive outcome of this scheme, Govt of India wanted to implement[9] it as nation wide project and it was announced by Piyush Goyal during the 2019 Interim Union Budget of India on 1 February 2019.
Important Link: